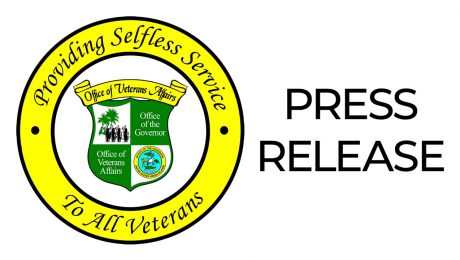 Eryle Alric Rohlsen (deceased) answered the first call to duty by enlisting in the United States Army in July of 1944 until he was honorably discharged in April of 1946 at the rank of Tech Sergeant. After his separation from the military, Mr. Eryle Rohlsen continued as a servant within his beloved community, the U.S. Virgin Islands. He served in the capacity of Commander of the American Legion District 10 and was also elected as the first, and thus far the only person from the Virgin Islands, to be elected as President of the National Association of State Director of Veterans Affairs.

The staff of “The Eryle Alric Rohlsen Veterans Affairs Building” was relocated in 2016 due to fair wear and tear and the need for renovation to the building. During the initial process, the building suffered additional damages as a direct result of the 2017 Hurricane Season and further delayed the process. “We are happy to be back at our new and improved home office. It is also our pleasure to assist the Bryan/Roach administration in progressively ensuring that the legacy of Virgin Islands heroes/honorees continue to live on appropriately”, said Director Farrell.

NOTE: Due to social distancing recommendations, we will make this ceremony available via social media and the government access channel. We ask that persons with official invitations be the only ones physically in attendance.

“National Vietnam War Veterans Day” to be celebrated via motorcade

The Virgin Islands Office of Veterans Affairs extends an invitation to “all” Veterans to join us for a motorcade in their respective district to help celebrate our Vietnam War Veterans. In an effort to discourage and prevent mass gatherings, per Governor Bryan’s mandates, Veterans will be asked to participate using their own vehicle. Both motorcades will begin at 12pm. Staging information for each district is as follows:

Staging Time and Location: 11am at the Northern end of the 4Winds Shopping Center Parking lot.

Staging Time and Location: 11am at the D C Canegata Ballpark

The management and staff of the Virgin Islands Office of Veterans Affairs is pleased to announce the relocation of the St Croix office. The office is now relocated back to its original Watergut location. At this location, the office is co-located with the Police Athletic League (PAL) building at 1013 Estate Richmond. Operating hours are effective immediately from 9am to 4pm Monday through Friday. In addition to (340) 773-8387, the office can also be reached at (340) 727-8389 or (340) 727-8390.

An official reopening ceremony will be scheduled in the very near future.

The management and staff of the Virgin Islands Office of Veterans Affairs is pleased to announce the initiation of a new communication platform for Virgin Islands Veterans. This platform is another effort to continue working towards Governor Bryan’s quest to bring the VI Government current with today’s technology.

Veterans interested in being kept abreast of all information relating to Veterans are asked to text the word VIVets (no spaces) to 888-652-8387. This text will generate a welcome message from the Virgin Islands Office of Veterans Affairs. Subsequently you will be prompted to provide your name, phone number, email address, branch of service and dates of service. After these 2 small steps are completed, there will be no further information required.

If there are any further questions, please call our office at one of the following numbers:

The VA Caribbean Healthcare System will be offering COVID-19 vaccinations to the following groups of Veterans:

Priority will be given to those veterans who schedule a vaccine appointment by calling (787) 641-4591. Walk-ins will be accepted only if vaccines remain once all appointments have been accommodated. Those, if any, will be available while inventory lasts. Veterans taking the vaccine must be available to receive their second dose in 28 days to complete the vaccination.

Family Members have been notified of this ceremony. Anyone wishing to attend either ceremony is asked to please follow all safety measure currently in place.

First Bank has made it known to the Lieutenant Governor of the Virgin Islands and the V.I. Office of Veterans Affairs that they are launching a new initiative for Veterans in the territory.

“Having insight on the upcoming announcement, I am very happy that First Bank is taking this step to assist our Veterans. Our Veterans deserve every bit of it. On the mainland, these opportunities come a dime-a-dozen for Veterans. I don’t usually speak for others, but I know I will be well in line when I say our Veterans will embrace this opportunity”, said Director Farrell.

Clarification of Statement Made by the Honorable Senator Donna Frett-Gregory

The Honorable Senator Donna Frett-Gregory on June 5, 2020, made a statement as part of the finance committee meeting which requires immediate clarification.

After asking for a point of personal privilege the senator stated “I think it’s time that we require the leader, Mr. Patrick Farrell of the Veterans Affair, to establish a policy to address the Veterans that have to travel off-island”. Senator Frett Gregory went on to say, “If the policies are established then we can look at if the cost to travel to Puerto Rico is fifty dollars and the cost to travel to the mainland is ah hundred then we give them the difference. But we need to establish what that policy is, I think that’s missing; and we had that conversation with him before”. The senator further went on to say “It’s time that we require him to establish that policy so we can know exactly what it is cause I don’t want for anyone to believe that any of us in this body is not in support of the Veterans. Once we put the respective policies in place then the Veterans would be clear on what you can and cannot do”, said Senator Frett-Gregory.

Senator Frett Gregory is correct about having a prior conversation on this matter.  The recommendations given by Senator Frett-Gregory and other Senators to create a policy were accepted. This would be a policy that would financially assist eligible Veterans who elect to travel to their VA Medical facility of choice for medical care. This policy is available on the website of our agency, https://veterans.vi.gov. I also host a weekly radio show which provides this type of information to our Veterans. If I may add, Senator Thomas and Senator Hodge, who are Veterans themselves, are aware of this policy. Important to note, Veterans are reimbursed 100% of what they pay for their plane ticket by the VI Office of Veterans Affairs when traveling for medical appointments to the VA Med Center in San Juan.

I was virtually present in the meeting when it was stated that the Office of Veterans Affairs did not have a policy in place for the matter at hand. It was very disappointing that I was not allowed to respond and publicly share the availability of this policy. I find that to be very unfair. As professionals we must find a better way to deal with each other versus tearing down each other’s character; we must cease from this type of behavior, said Director Farrell.

The Virgin Islands Office of Veterans Affairs has enlisted the assistance of My Brother’s Workshop to manufacture flag cases locally for next-of-kin of deceased Veterans.

One of the events that take place as part of military burial honors is the presentation of a neatly folded United States Flag. That flag is authorized to be presented to the legal next-of-kin of deceased Veterans. More times than none, after presentation, these burial flags are used as keepsakes by family members to remember the long and faithful service rendered to the United States by their loved one. To assist with the longevity of the flag, the Office of Veterans Affairs joined with My Brother’s Workshop to create something that would assist in that endeavor. Trainees guided by members of the staff at My Brother’s Workshop created a masterpiece that will mark a significant difference from the usual plastic cases issued previously.

“I am absolutely pleased that we will be able to provide a sturdier flag case for the families of our deceased Veterans. Not only will it look better, but it will enhance the shelf life of this very important keepsake. Unfortunately, we will not be able retroactively issue flag cases”, said Director Farrell.

The VA Caribbean Healthcare System will be conducting the final day of testing for Virgin Islands Veterans on Wednesday June 3rd, 2020 on the island of St Thomas.

Initially testing was done by appointment only however, there will be 25 additional test kits available on Wednesday June 3rd, 2020. Veterans interested in having the test done can report to the VA Clinic on the island of St Thomas between the hours of 9am and 12pm. Please have a photo I.D. available once you arrive. Testing will take place using a drive-thru concept; there will be no need to exit your vehicle. If you are not driving, arrangements will be made for you to be tested simultaneously using a different method.

Any Veteran missing this opportunity in either district, and begin experiencing any COVID-19 related symptoms, please call the VA Clinical Contact Center at 1-877-741-3400 for further instructions.

For more information on how the VA Caribbean Healthcare System is responding to the COVID-19 pandemic please visit www.caribbean.va.gov/emergency or call Director Farrell of the Virgin Islands Office of Veterans Affairs at (340) 774-8387.